For 50 years, the Somali sengi, a mouse-sized elephant shrew, was considered “lost” to the international scientific community. No one was quite sure what happened to that species, but now, half a century later, we have answers.

The Somali sengi was last officially documented in 1968. But some anecdotal evidence from Djibouti, in the Eastern region of Africa, led one research team to attempt a rediscovery of this elusive elephant shrew last year.

The insectivore was last documented in Somalia, but that’s not where researchers went to seek it out this time. Instead, they went to neighboring Djibouti and asked locals if they recognized a photo of the animal.

It turns out, the Somali sengi wasn’t so “lost” after all! Locals did recognize the photo and were able to lead research teams to their suspected habitat.

“For us living in Djibouti, we never considered the sengis to be ‘lost’, but this new research does bring the Somali sengi back into the scientific community, which we value,” said Houssein Rayaleh, an ecologist with Association Djibouti Nature, in a press release by the Global Wildlife Conservation. “For Djibouti, this highlights the great biodiversity of the country and shows that there are opportunities for new science and research here,” he continued. 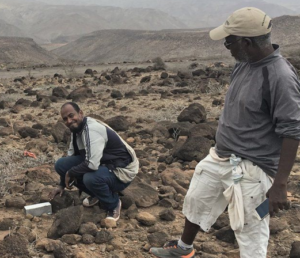 Rayaleh went on to lead the research team to an area to set up humane traps for the Somali sengi. According to an Instagram announcement, they filled the traps with peanut butter, yeast, and oatmeal, and waited. Soon after the first trap was set, they had their first Somali sengi in over 50 years.

“When we opened the first trap and saw the little tuft of hair on the tip of its tail, we just looked at one another and couldn’t believe it. A number of small mammal surveys since the 1970s did not find the Somali sengi in Djibouti – it was serendipitous that it happened so quickly for us,” said U.S. researcher Steven Heritage.

Somali sengi are interesting little creatures that resemble rodents but are actually insectivores. They use their trunk-like probscis to snort up trails of ants and other insects for food.

Unlike most “lost” species that are rediscovered, the elephant shrews are actually doing quite well. The World Wildlife Conservation group reported that out of around 1,000 traps, the research team caught 12 Somali sengis. Robin Moore, part of the Global Wildlife Conservation, said, “Usually when we rediscover lost species, we find just one or two individuals and have to act quickly to try to prevent their imminent extinction.” https://www.globalwildlife.org/

It’s possible that the success of this species is due, in part, to their natural habitat. Situated in a rocky, desert environment, they’re well protected from human destruction. It’s unlikely that humans would be tilling their land for crops or building cities in that type of habitat.

The Global Wildlife Conservation recently had the Somali sangi listed 5th on their list of “25 Most Wanted Lost Species.” The list is made up of “lost” species, of both plants and animals, that may need help to prevent extinction. The description reads, “These lost species are animals or plants that have gone unseen for years or decades and are feared possibly extinct. In order to save these species, we first need to find them.” The Somali sangi is now happily labeled “FOUND” on that list – and the outlook on their species’ survival is positive.

Check out the neat animal in the video below:

You contribute a general donation to the Dean Schneider Foundation! This donation will support our purpose and be used wherever it is needed the most!

Want to keep up to date with the latest with Dean?

Sign up to get notifications straight to your inbox

Man Rescues Baby Dolphin After It Got Stranded On The Beach